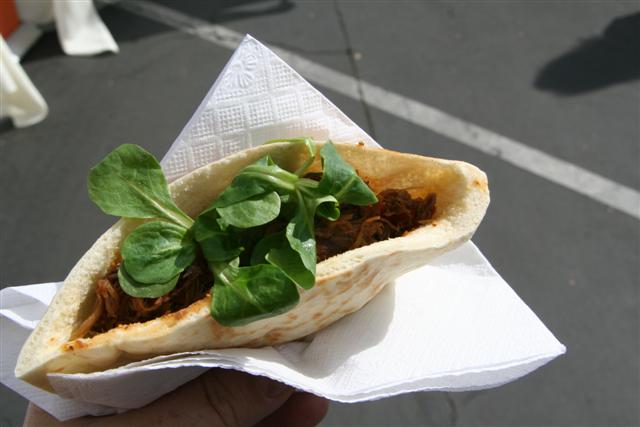 1. The first offering I came across at the Great Chefs of LA event taking place in the backlot of CBS was Momed’s duck shawarma. Momed, in Beverly Hills, is a contraction of “Modern Mediterranean”. The pita looked awfully generous for someone who knows she is going to be faced with a wealth of tempting food that day. Still, I ate the entire thing (maybe scarfed it down is a more accurate description, but doesn’t sound quite so professional). Rich, delicious and sweet, the duck meat was offset with an intense sauce. A perfect start for the day. 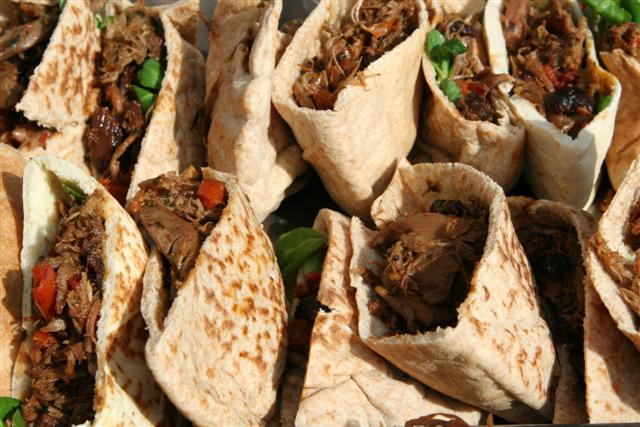 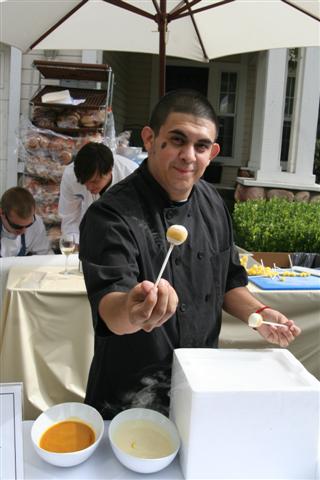 Stefan Richter and Leo Bongarra offered dipped pineapple in liquid nitrogen, then made a layer of vanilla ice cream and mango sorbet. They were fun and delicious, even if the layers melted at different intervals and Stefan Richter wasn’t there in person. Just wait until the lollipop stops steaming or you will have a very unpleasant experience. 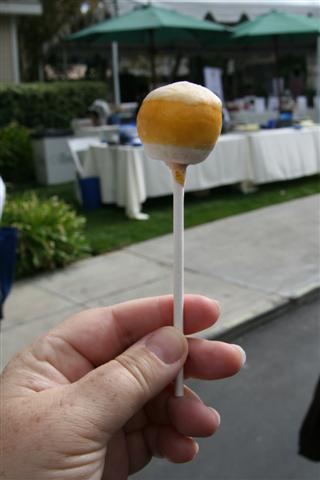 3. The Border Grill Truck, staffed by Mary Sue Milliken, served up Yucatan Pork Tacos – roasted achiote pork, pickled onion, and orange salsa along with churro tots. I was trying to watch my alcohol and sugar consumption, but I would have jumped all over those churros had I known they were filled with dulce de leche. 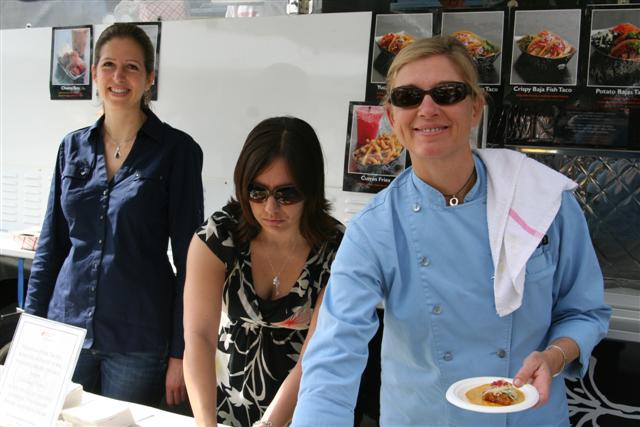 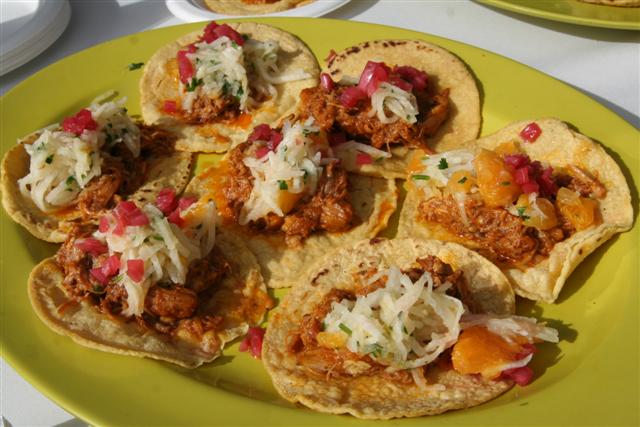 4. The Loteria Grill fried homemade mushroom empenadas with epazote , potato, chorizo and cheesequesedillas and roasted poblano quesedillas, although they were as thick as empenadas 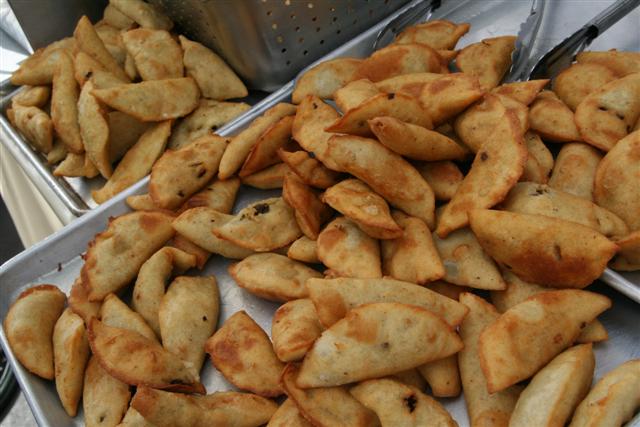 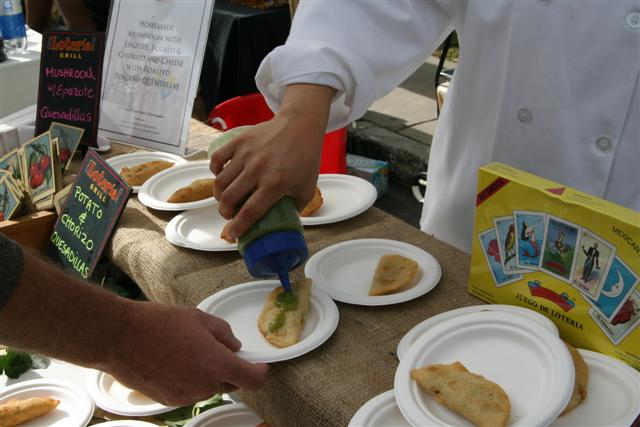 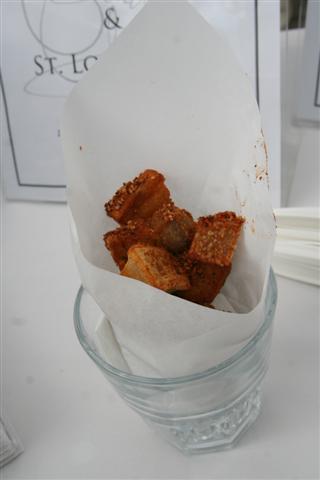 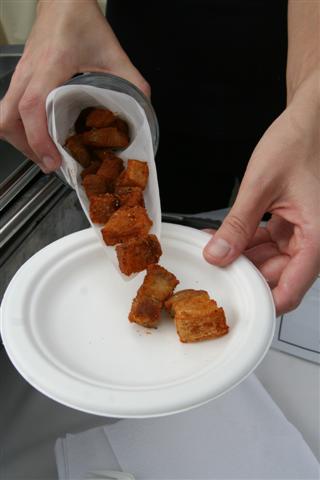 6. Ian Gresik of Drago Centro’s celery root panna cotta, pancetta and basil. It was light and refreshing after all of the heavy meats, even with the pancetta 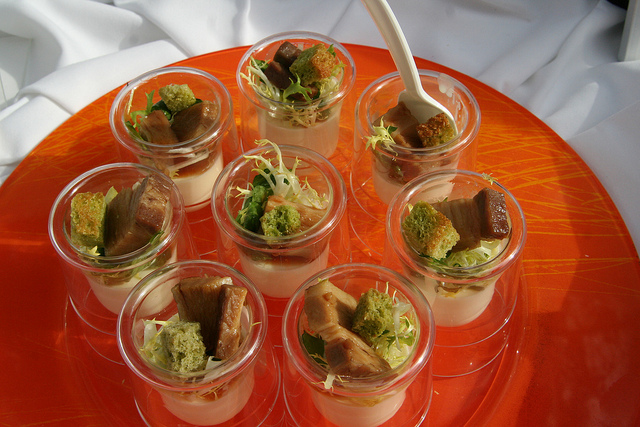 7. Shigefumi Tachibe’s free range chicken liver mousse with organic fruit jam. I am not normally a fan of chicken livers, but the quality mousse and excess jam made the dish taste very similar to foie gras 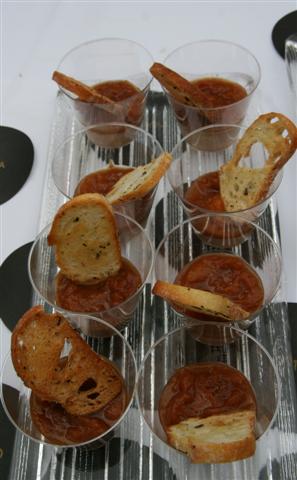 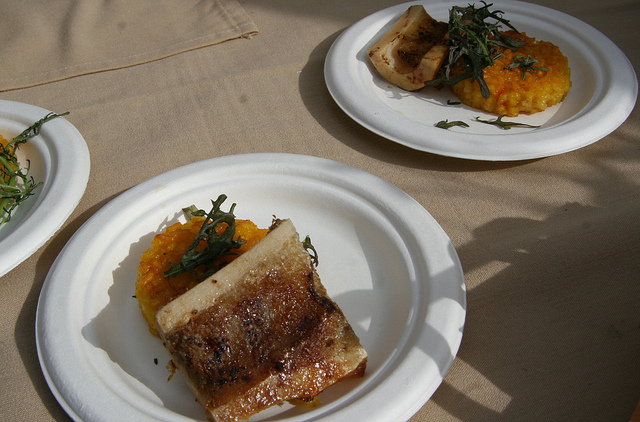 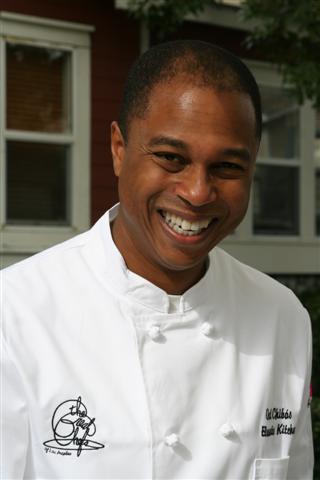 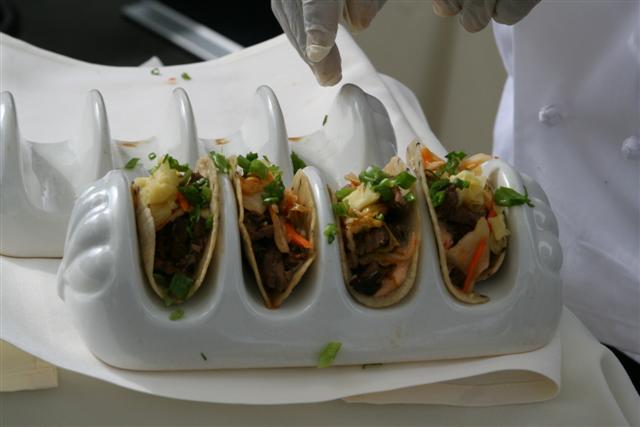 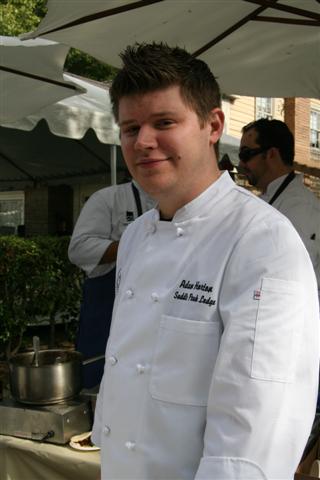 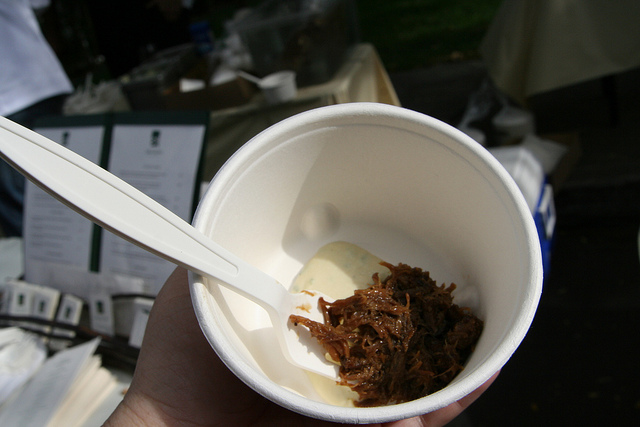 11. Drago’s little piggie was not going anywhere. Except in my tummy. 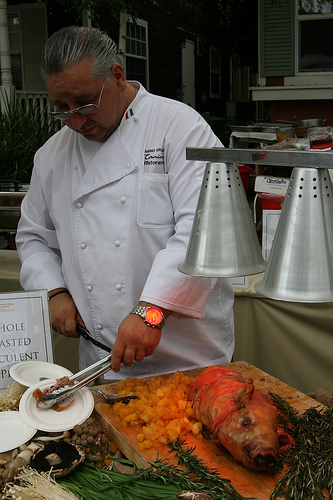 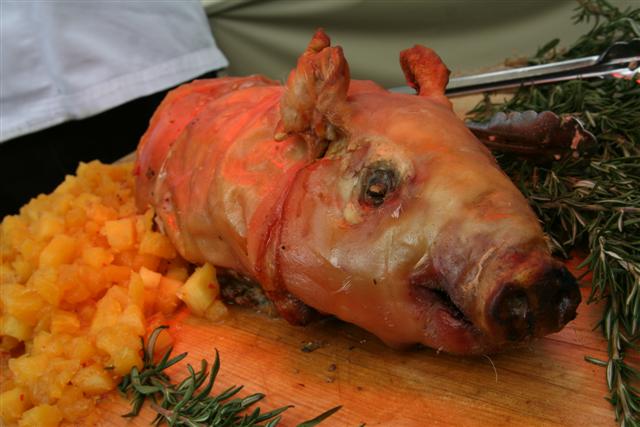 12. Michael Fiorelli of Mar’sel and his crew 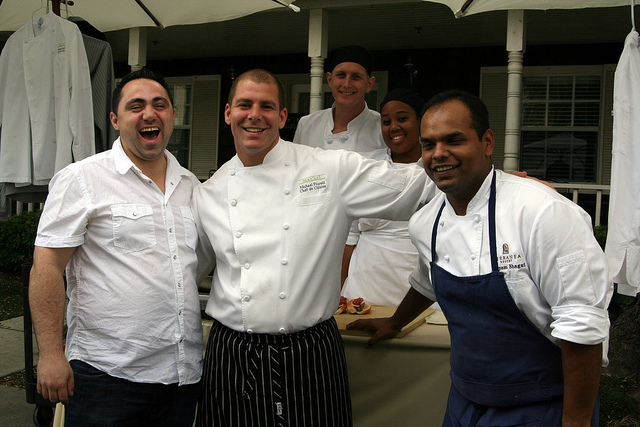 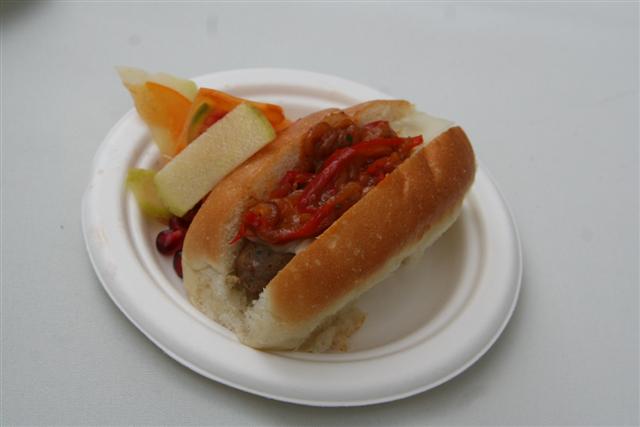 13. Ken Bernard’s “All about the Bread” served up generous pastrami sandwiches. Pepperoncini gave the sandwich a nice kick.They insisted they were “New York-style”, but were thinly sliced unlike the thick brisket slabs of New York. But they were big and outrageous, like New York. 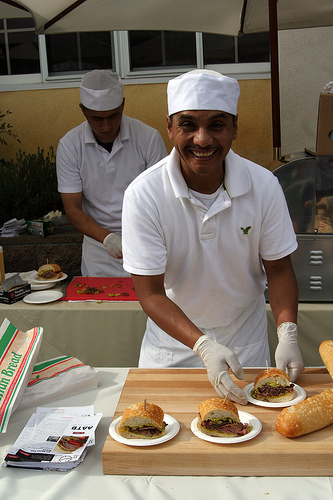 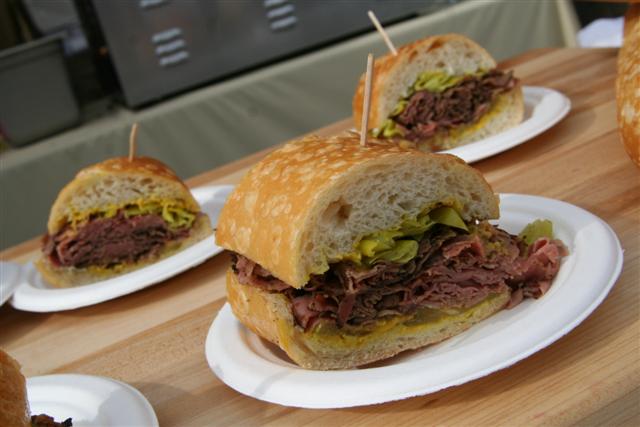 14 Red Velvet Cake. And turquoise velvet cake? The chef said that he made the blue one with the same chemistry-set method with baking soda and vingar, but just used a different color. It’s the simple things that no one thinks of that mark true genius. And in spite of avoiding sugar, who walked around the rest of the day with a blue tongue? Me! That’s who! 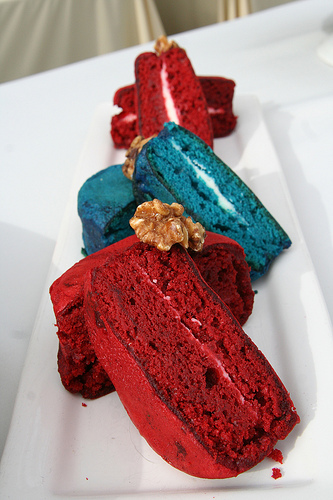 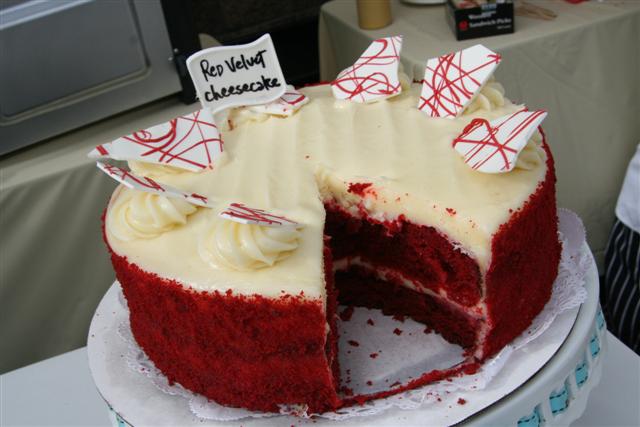 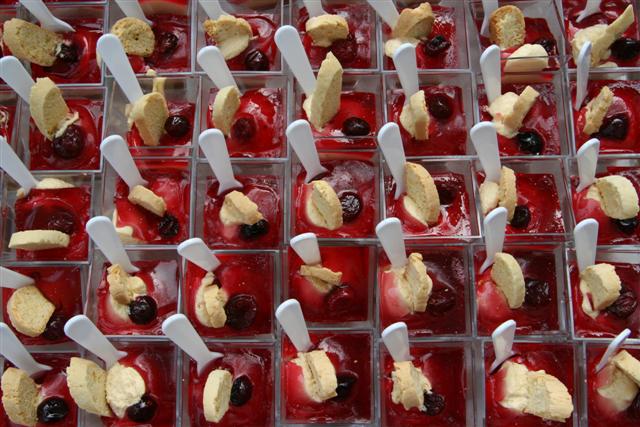 16. No list of favorites would be complete without Polka Tots cupcakes. I especially love their carrot cake, called the “Bunny Hop” and the dulce de leche. Plus, their shop is right next door to my local haunt, Slaw Dogs in Pasadena. 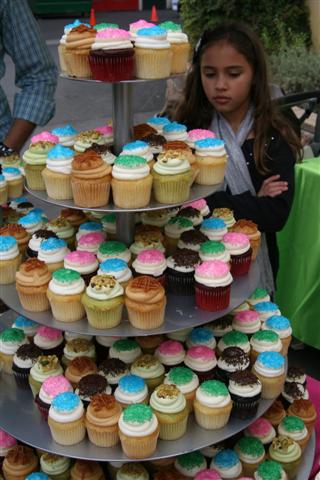 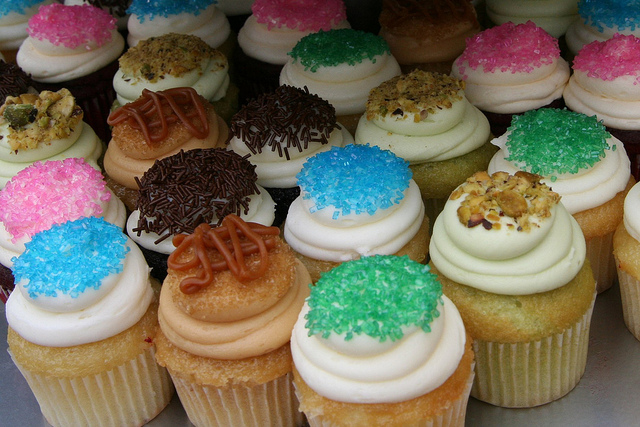 I like catfish. Sure, we all like catfish, but I think for me it is somehow deeper.
View all posts by Kiki Maraschino →
This entry was posted in Bakeries, Cajun, cake, chefs, cupcakes, desserts, Events, Festivals, Sausages, Studio City. Bookmark the permalink.