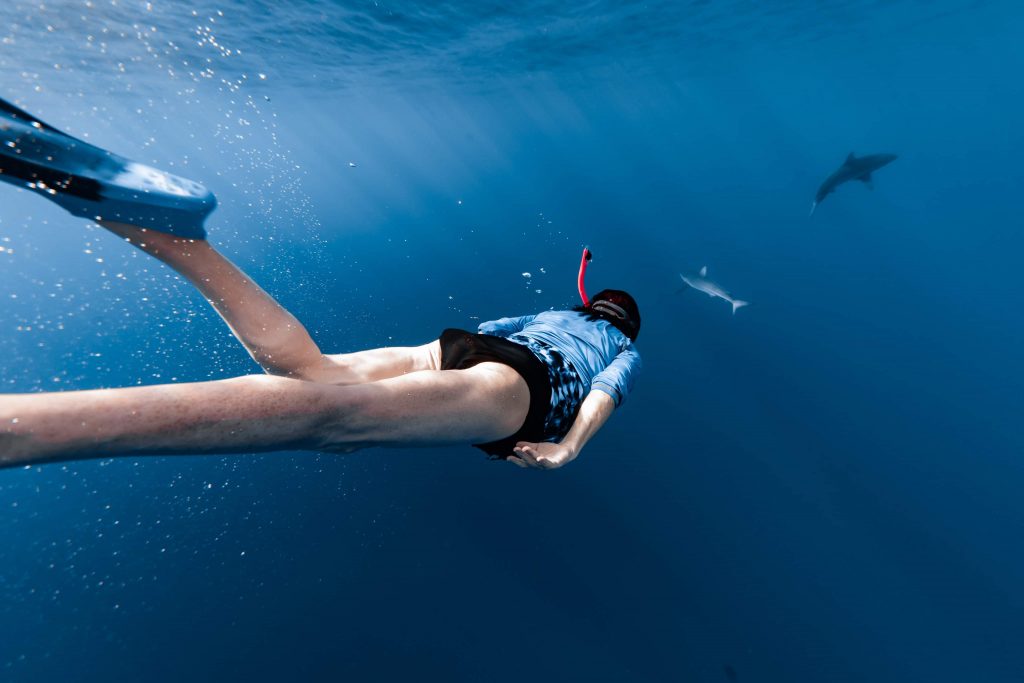 On Friday, we took an Uber to Haleiwa Harbor on the North Shore for a shark dive. Really, it’s snorkeling, but I guess that doesn’t sound as cool. I had never thought of swimming with sharks; it’s not even on my bucket list. But when I had rattled off possible activities, that’s the one that got OT excited. I wasn’t worried because they were mostly Galapagos and Sandbar sharks, and everything I read online said they rarely attack humans. I never wanted to do a shark cage, chumming and artificially riling the sharks up like they do with broncos in the rodeo. This would just be swimming around with them. I forgot to get a nice establishing shot of the boat or the harbor, but I did take a picture of the beach on the other side of the parking lot 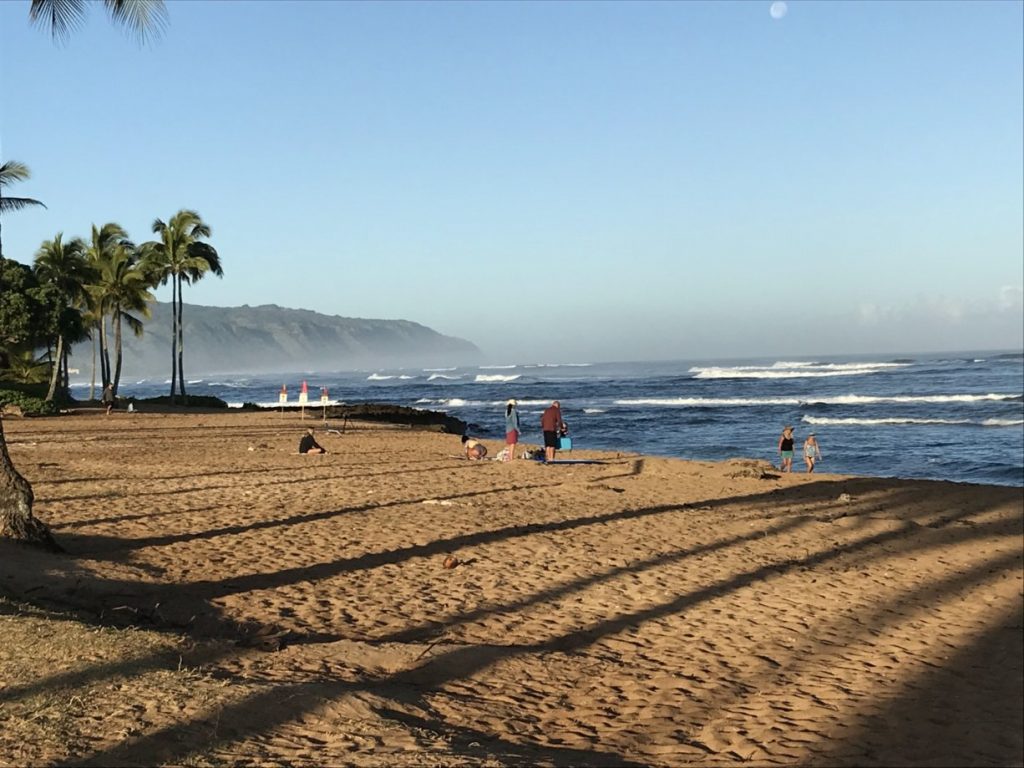 We were on a small boat with a captain, three guides and a family of four. There was a long rope floating off the back of the boat so you could hold on and feel secure. This time I held my go pro in my hand. They told me that the camera emits the exact same electrical charge as a crab, and if I had it strapped to my chest, it could make a shark mistakenly bite me. I wonder how they discovered that. Also, what a dumb shark to think that crabs are swimming around on the surface of the ocean. I mean, sharks are known to be smarter than other fish, but is that really saying a lot? Since I don’t use my arms when I’m wearing fins, holding the GoPro wasn’t a bother at all. Here is POV video of me going in the water. I took so long to go in because I was waiting for the waves to be even with the boat so I could just slide in and wouldn’t make a big splash. OT is the one in the black rashguard swimming by like a dolphin in the beginning. I love sharks, even if they are stupid. It was magical.

I wasn’t afraid at all. I love being in the water. I tend to follow whatever creature is passing by, so I kept swimming after the sharks. The guides would tap me, and I would have to surface and remove my snorkel to talk, so I swallowed more sea water than I would have liked. They kept instructing me to get back to the boat, and the third time they told me to just hold onto the rope, dammit! I went back in the boat earlier than I normally would have due to all the water I was taking in.

When I talked to OT later, he said he was terrified the entire time. He pointed out the aggressive way they were coming at us, and the way the guides were bonking them and turning them away. I had actually wanted more action from the sharks. I told OT that it’s not as if we were chumming. He told me that with all the fishing boats around the island throwing scraps into the water, the sharks probably connect all boats to food, regardless. He said, “If it hadn’t been for those girls, we would be shark chow.” There was a ball hanging off a winch on the side of the boat emitting electrical currents to attract the sharks. One shark bit it right off and swam away with it. OK, that was kind of intense.

And there was one time when a shark swam straight across the rope, perpendicularly, that was probably scary for the people at the front of the rope. When we were all back in the boat, I had accidentally left my GoPro on in my bag, so I could hear us talking on the recording later. The tourist mom said, “When that shark swam across the rope, I was OUT!”

I said, “Really? That’s when I was IN!” Maybe adrenaline makes me stupid.

Later, when I watched these videos, I think perhaps I was too cavalier. You can see the women turning the sharks away with paddles, and at the end a shark comes swimming at us quickly on the right, and one of the free divers jumps across my shot to turn it away. Next time I will stay with the boat.

One of the guides was stung by a man o’ war.

Cute dive guide: It was going for my butt, so I put my hand out to protect it and got stung on the hand.

Me: It’s nice that she got stung?

Tourist Mom: No, Her butt–it’s nice 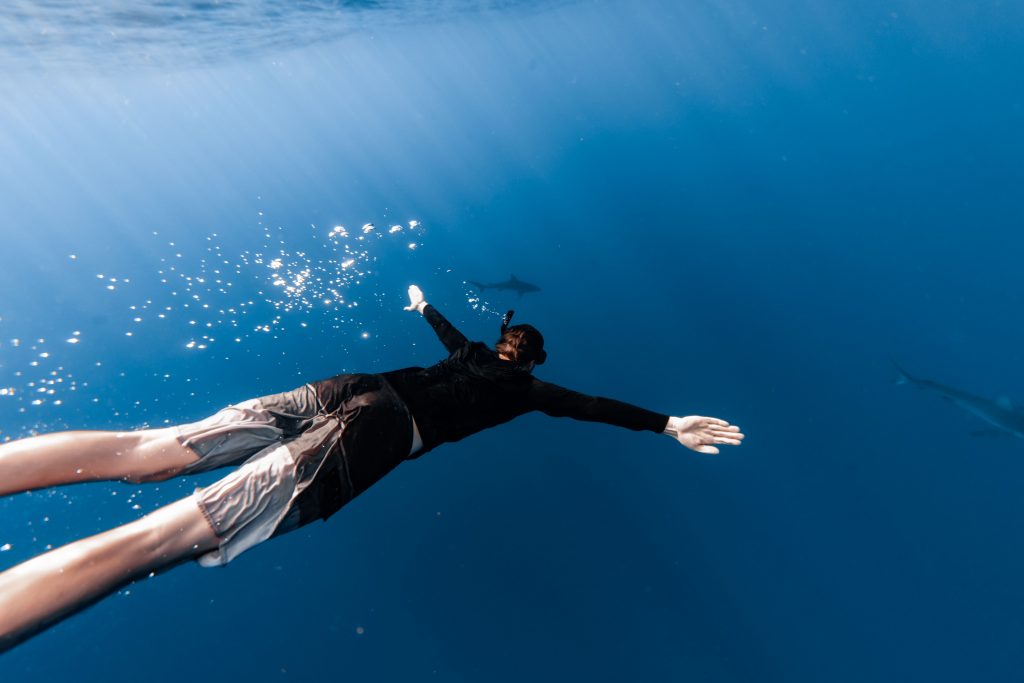 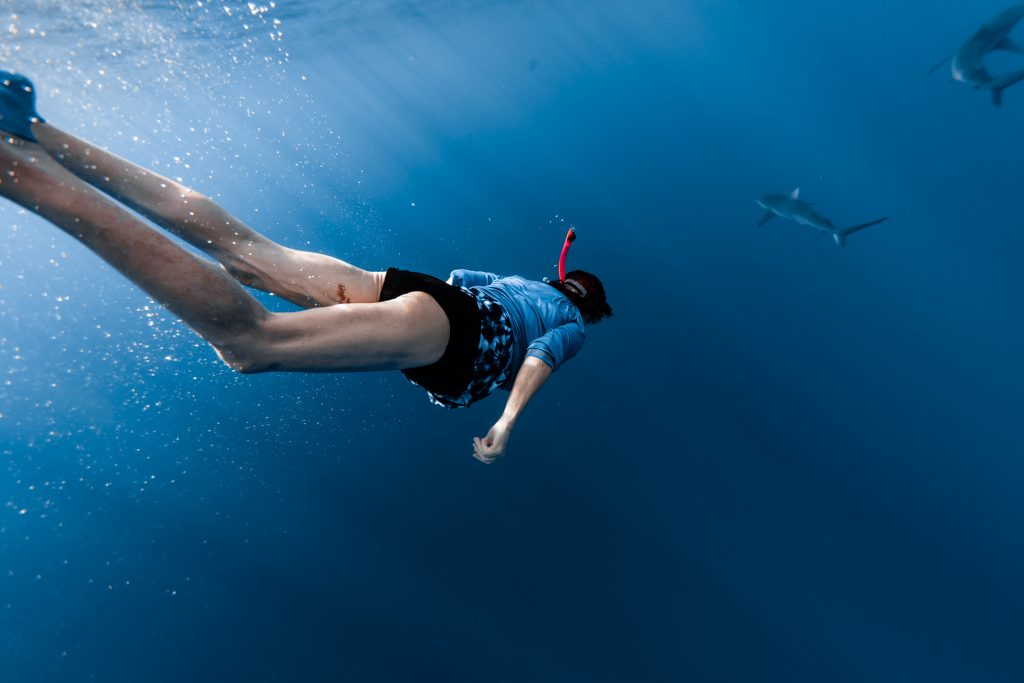 I looked up the sharks again later. From the Encyclopedia Brittanica:

Galapagos sharks and other members of the family Carcharhinidae are commonly referred to as “requiem” sharks, the group of sharks often considered to be responsible for most attacks on humans [Sandbars are also Requiem sharks]. The potentially large sizes of Galapagos sharks and their tendency to be present in large numbers warrants special attention by divers and swimmers. Caution is recommended when swimming with this species, especially when fishing or spearfishing may excite and provoke the animals.

Then I searched shark attacks in the area and this was on the exact same kind of tour we were on–maybe the same tour operators. Swimming with sharks is considered to be “provoking” them, so it’s not like they were booping them on the nose or anything. That must have been crazy!

So, I have questions. Was it one shark or three sharks? Was it a feeding frenzy? Was it one shark but R. Russell just unwilling to commit to a size and genus? Like, “I don’t know. It was trying to chew my arm off! I wasn’t checking for identifying marks! Length? Big! It was a big-ass scary shark! I didn’t stop to measure the damn thing!”

I need to hear this story. Was “confidential” a tourist who got bit first? Were they wearing a GoPro and that’s how they found out sharks think they are crabs? And then the other two could have been guides who paddled, punched and bonked the shark to rescue ” confidential”? They would explain why they were wounded on the hand and the arm. Or maybe the one who got bit on the hand was like, “It was going for my butt, so I put my hand behind me.”

This entry was posted in Hawaii, whales and sharks. Bookmark the permalink.