I have 2 questions whenever I arrive at a new place.

Question 1. Can you jaywalk?

Yes. But cars and bikes will run you over–even if you are in a crosswalk! Between the street and the bike lane, it is a bit like playing Frogger. I finally figured it out over time. there two kinds of crosswalks. the ones with broken lines. will not protect you. They appear to be for bicycles. Cars will stop for you in crosswalks with solid lines.

People always complain about getting run over by bikes. The bike lanes are clay-colored, so just stay off of anything clay-colored. I forgot this rule ones and cried, “Shit!” as I jumped out of the way of a passing group of bicyclists who had a good laugh at my panic.

Do not walk on this clay path: 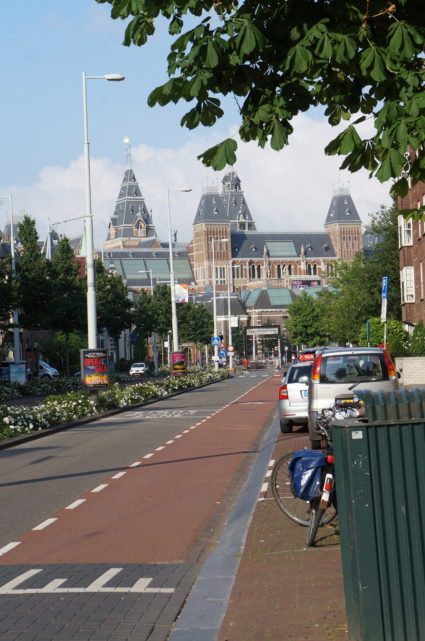 Question 2. Do you greet strangers on the street?

No. You do not nod or smile or even look them in the eye unless you are taking part in some transaction, then eye contact is pretty much the same as in American culture. I had a hard time not looking people right in the eye and smiling, which I gather is being overly familiar. People do respond nicely to questions like, “Is this the right bus stop?” Or “Which way to the museum?” But if you are just passing on the street, don’t look at them. Stop it! They have nothing to do with you.

We take our sunshine for granted. My first day in the Netherlands was a sunny one, and I took a long nap. The next two days were overcast and rainy. So even though I didn’t want to go on a boat ride, as soon as the sun came out I took a boat ride.

I noticed most people in the cities and who work in hotels and shops speak English. Those who don’t are game to speak a patois with you and use a lot of pointing and gestures. Some people act offended if you ask if they can speak English. They respond with “Of course!” in a tone that sounds like, “Do you think I’m stupid?”

People say, “Good morning,” and “Hello,” but they don’t ask, “How are you?” If they do ask, they genuinely mean it and expect a real answer.

They are also very conscious of class issues. If you order an Uber, you sit in the front seat with the driver. To sit in the back like you are something special is very classist.

One difference between Southern California and Europe in general is that people do not walk around staring at their phones there. High School kids do it on the U Bahn in Germany, but that’s about it.

Another thing–we are really serious about hydrating in L.A. No one else I saw on my entire trip walked around with a drink. Even serious bike riders in spandex bodysuits didn’t have plastic bottles of water.

The cokes were small, so I would order them two at a time, which freaked people out. They would bring me a separate glass for each coke I ordered, which I didn’t really need. I tried to ask the front desk to stock my mini fridge with Coke Zero, a service the card says they offer. They just kept telling me to order room service. So I ordered 3 diet cokes and 3 sparkling waters, planning to keep them in the fridge. Communication breakdown. 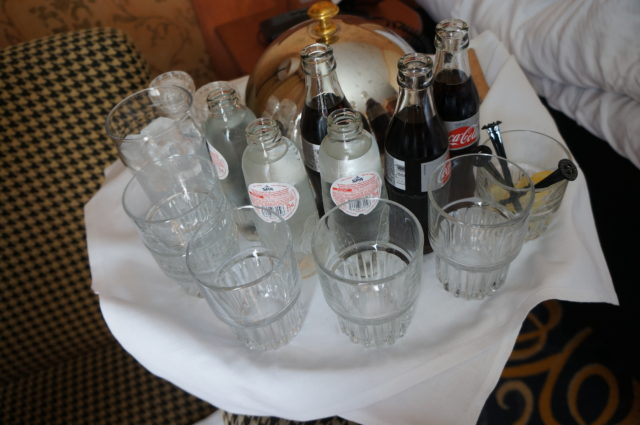 Other things to love about Dutch people:

They always have Drost chocolate sprinkles on the breakfast buffet.

They charmingly call the train drop off point “the Kiss and Ride.”

They are extremely apologetic.

They have done away with so many of those pesky vowels.

I like catfish. Sure, we all like catfish, but I think for me it is somehow deeper.
View all posts by Kiki Maraschino →
This entry was posted in Europe, Netherlands. Bookmark the permalink.