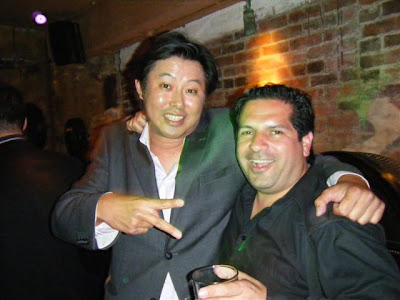 This week my friend, Eddie, of Deep End Dining was a guest judge on Top Chef Masters! He and co-judge Bill Esparza of Street Gourmet LA hosted a viewing party at the Edison. It was fun to see everyone. I mostly hung out with Eddie, Valentino of Trippy Food and photographer Pai Wei. (Photo by Pai Wei) 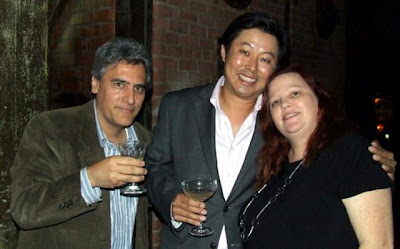 The Edison is one of LA’s more elaborate bars, a cross between Frankenstein’s lab and a real Edison Plant. I asked the bartender to give me whatever he wanted, which seemed to throw him. He gave me a nice whiskey cocktail in a martini glass, not too sweet or too manly. Valentino went for the elaborate absinthe for which they are known. 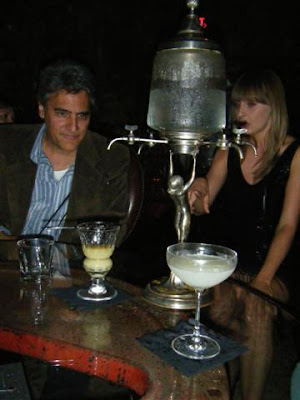 We ordered sliders with gouda and fish and chips. It was the biggest dichotomy of dishes yet. The sliders were plump, juicy, flavorful perfection. The fish were oily and fishy. My fingers looked like I had dipped them in a bottle of Wesson oil after touching them. One bite was enough. The server was super chatty and friendly and deserves a 10. 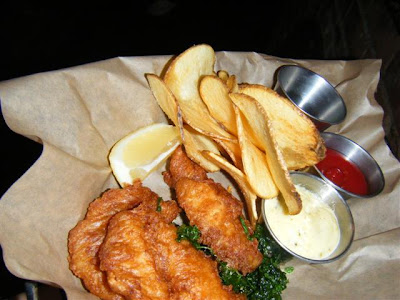 It was nice to see Esther and Brian of Eatours and the couple from the Dim Sum Truck. Julie Wolfson, Michel Neve and I got into an excited conversation about our younger days and creative parenting. When Michele is excited about the conversation he grabs my hands to shut me up. I think it’s adorable. My husband said, “Somebody finally found the OFF button.” The party in sensurround by PaiWei:

The sound wasn’t working so the Edison brought out complimentary champagne to make up for us watching the show captioned. And not just any champagne. Perrier-Jouet. Swank.

I like how Eddie psychs them out by saying things like, “This is the first time I have ever had duck tongues (pause for effect) that were not braised.” He is also very good at looking interested in what other people are saying. Another favorite moment is Bill Esparza saying one dish looked like “a teenager went through a buffet line and it was not good.” 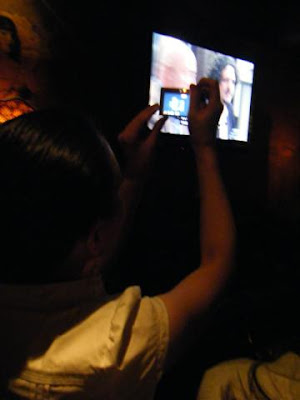 I like catfish. Sure, we all like catfish, but I think for me it is somehow deeper.
View all posts by Kiki Maraschino →
This entry was posted in chefs, Events, video. Bookmark the permalink.