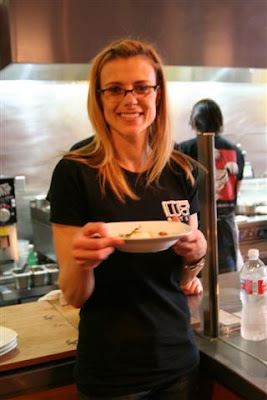 Ludobites is a pop-up restaurant with no set location. Chef Ludo, bad boy of Iron Chef Masters with an ever-present swoon-worthy five o-clock shadow rents out diners that are only open for breakfast and lunch, enabling him to serve creative food with total freedom at a bargain price. Version 4.0 has popped up at Gram and Papa’s where it will serve until May 28th.

Most of the menu rotates, but some favorites are standard. Some sample menu items are: 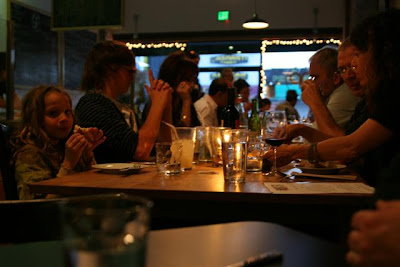 Ludo’s wife, Krissy, runs the front of the house with a dazzling smile and genuine welcome. The room is small enough that you truly feel like guests rather than customers.

Every meal should start with a baguette and honey-lavender butter, followed by Brie Chantilly, Honey Comb, Balsamic, Frisee Salad. Yes, the frisee salad is a sprig of frisee, but the brie, whipped and whipped into a fluffy cloud of heaven, then reigned back in and molded into perfect into quenelles, is an entirely new sensation and one long overdue. 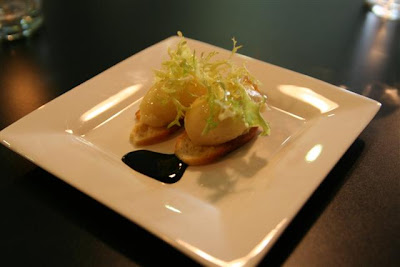 The “Paris” Ham Soup, Bread, Swiss Cheese, Radish, Cornichon, and Guiness is something I will be calling out for on my deathbed. The unlikely ingredients work on a ploughman’s lunch, so why not in a bowl? I’ll admit I questioned the radishes at first but finally succumbed to their peppery bite. Little squares of cheese-infused bread float in the soup like Lilliputian grilled cheese sandwiches. Comfort food at its best. 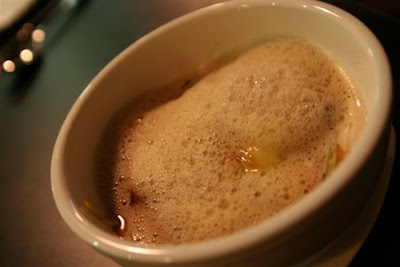 The steak au poivre was a little tough compared to my usual filet, but the sauce was rich, and I could have eaten an entire bowl of the silky, marrow-laden polenta. A charred smear of eggplant was eggplant concentrated down to its very soul. 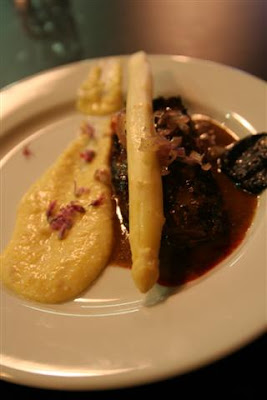 The Foie Gras Pina Colada may sound surprising at first. But foie gras and fruity flavors were made for each other. The coconut ice cream and pineapple cream were flavorful without being sweet, which was intriguing. The rum gelee knocked you on your ass just like a real shot would.

Just as I took my first bite, I overheard a woman behind me say, “I may not know food, but I know what I like to put it my mouth.” I choked on my food, trying not to do a spit take. Ludo called over, concerned, “Too sweet?” (Well, he is French so maybe he said “hurry” but that wouldn’t make any sense). 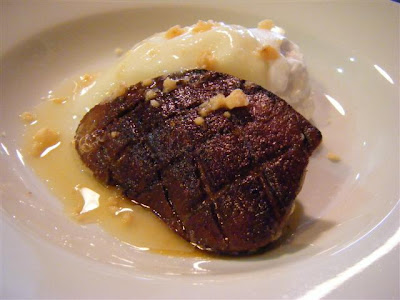 I walked over to the counter and told him I was actually really amazed by his ability to take flavors like pineapple and coconut and rid them of their sweetness so for the first time we only taste their pure essence. I asked him what I should order, and he suggested the dreaded squid. I know from Lindsay’s previous coverage his squid can be very uhhh, “rustic”.

He replied in that smooth French accent, “nooo, eet ees not scareeeee.”

When your table is right in front of the pass and the chef tells you to eat something, you eat it, so I ordered the squid carbonara. It was a stroke of genius for people watching their carbs, replacing the pasta with curls of squid. An egg yolk quivered on the dish, waiting to be pierced and ooze down. The pancetta and sage were delicious. The texture of the squid was the same as when you accidentally bite the inside of your cheek. 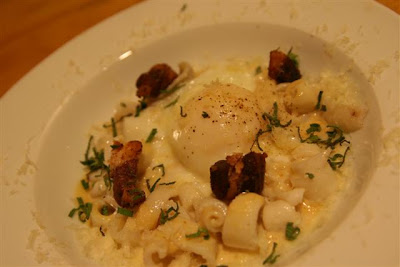 Which brings up an interesting question. I probably don’t want to order the squid again, but I enjoyed trying something new and innovative. Maybe like art, food doesn’t always have to be popular, maybe it is valuable because it moves the culinary arts to the next step. It is the future. It is the Dada of cooking. 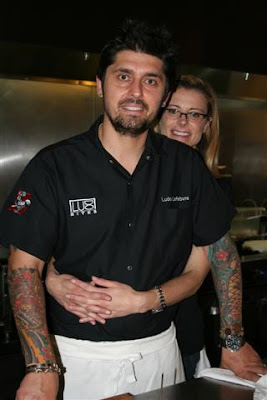 I like catfish. Sure, we all like catfish, but I think for me it is somehow deeper.
View all posts by Kiki Maraschino →
This entry was posted in chefs. Bookmark the permalink.