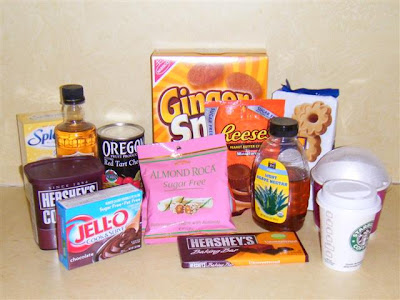 OK, so in reality, I can only get away with a few bites of all of the beautiful desserts I photograph for you. Instead I make do with no-sugar-added Fudgesicles and Jell-o Sugar-Free Chocolate Pudding Cups. So far these are the only two desserts that I don’t feel the need to throw against the wall.

Usually on my birthday I go wild and actually eat cake! But this year it just wasn’t in the stars, the doctors said NO. And that makes people crazy. It’s like the soul can’t rest until it is buried in hallowed ground or something. The immutable law of the birthday cake must be obeyed.

My mom’s fallback dessert of angel food cake, strawberries and Cool-whip is actually loaded with carbs even if it is healthy, and Cool-whip horrifies me. Is it actually plastic?

So then people try cupcakes made with Splenda. I know it’s Splenda. Splenda’s one molecule cannot fool me. And I have come to hate Splenda in everything except for an alcoholic drink I devised that is comprised of lemon juice, vodka and Splenda shaken with ice and strained. I call it the Ex-wife. I don’t know what my ex-husband calls it.

So, where was I? Dessert. No one can stand that I don’t have at least a symbolic cake on my birthday. Finally my mom said, “Why don’t I make some sugar-free Jell-o Gelatin and put some Cool Whip on top?”

I said, “Because that would make me cry.”

So, now, I have taken it into my own hands. I have to make something edible that will make my family secure in knowing that my birthday cake need has somehow been fulfilled.

Cream cheese is always good. The crust is easy – 1/3 butter, 1/3 crushed nuts and 1/3cookies. Use sugar-free shortbread and you’re done. But then came the filling. How do I make it sweet without Splenda or some other crap?

I tried using sugar-free Jello-powder. NO.

All varieties of sugar-free coffee syrups. NO NO NO

I tried all varieties of palatable sugar-free candy like peanut butter cups. NO

I mixed it with sugar-free ice cream topping, which actually was not bad. I was unsure of the physics of actually baking it, but it gave me hope.

Thinking about Splenda drinks made me think about Agave nectar. Although it has sugar, it is supposed to have some magic properties that defy the laws of physics and make the carbs inverse. According to wiki, it just has a low glycemic index, meaning it absorbs slowly and doesn’t spike your blood sugar. It is the drink ingredient of the moment among mixologists who don’t even have to worry about sugar, so maybe I won’t hate it.

When I started thinking about replacing a honey recipe with agave, Bob brought up the Source. Basically The Source are hippie spiritual seekers who once ran a successful restaurant in Hollywood and made delicious, delicious cheesecake. They use honey, which sounded like maybe I could substitute Agave syrup… hmmm. OK. The first one was really bad. It needed some tweaking. But the second one was good. It was really, really good. 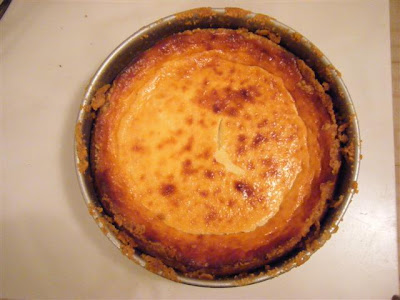 Mix all ingredients together until it is totally smooth.

Melt butter and mix together to make a paste. Pat into place in a round 10″ pan to make the crust.

I like catfish. Sure, we all like catfish, but I think for me it is somehow deeper.
View all posts by Kiki Maraschino →
This entry was posted in desserts, Recipes. Bookmark the permalink.