Lats Do it at a Dinner Party 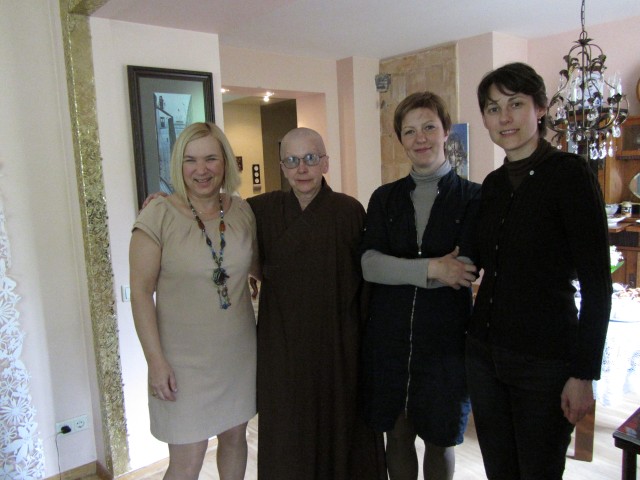 Bridin befriended a woman on the plane whose daughter, Signe, happens to host dinner parties at 10 Lats a head. 10 Lats equals about 20 USD. When she told her daughter she had a returning Latvian to invite, they decided to make a traditional Latvian meal for us, and to have a friend hunt for boar. I’ve never had anyone kill a boar for me before. It’s very exciting. 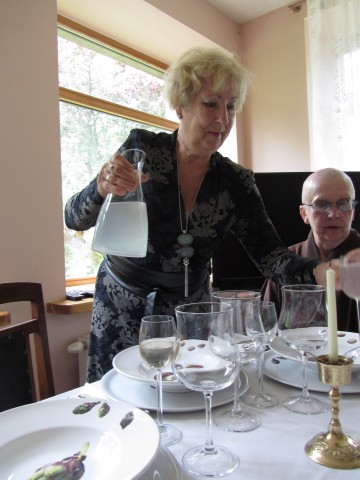 Signe was congenial and outgoing, providing a lovely environment for the English-speaking friends she had invited. They did tend to lapse into Latvian though, so there was some confused nodding and smiling on my part. To drink, we had birch champagne, which was very similar to regular champagne. With the meat a blackcurrant wine was served. Although I don’t normally drink wine, I tried it and it was more like a liquer – very fruity with a sharp kick.

The first dish was a soup. After a long and dark winter, one of the first signs of spring is a green that no one knew the name for, but it is like sour spinach. It may have been sorrel. It grows wild in the yard, “So you just cut the grass and you have soup!” There were also lovely new potatoes and quail eggs, which they set in your plate and ladled the soup over. 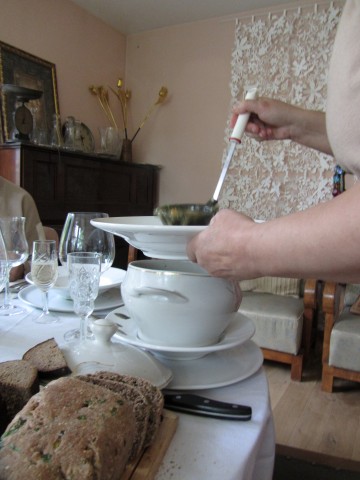 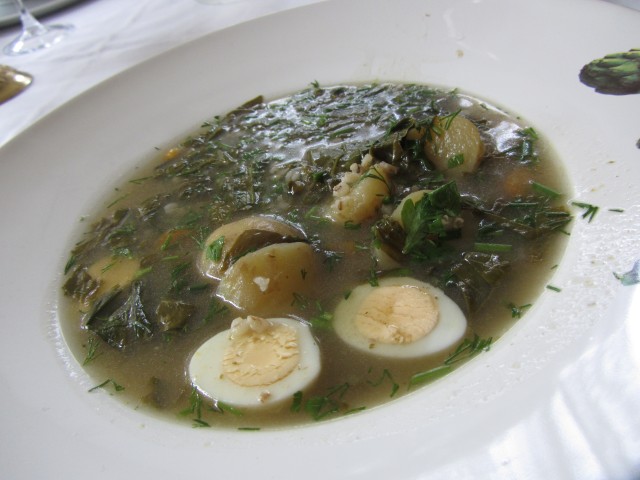 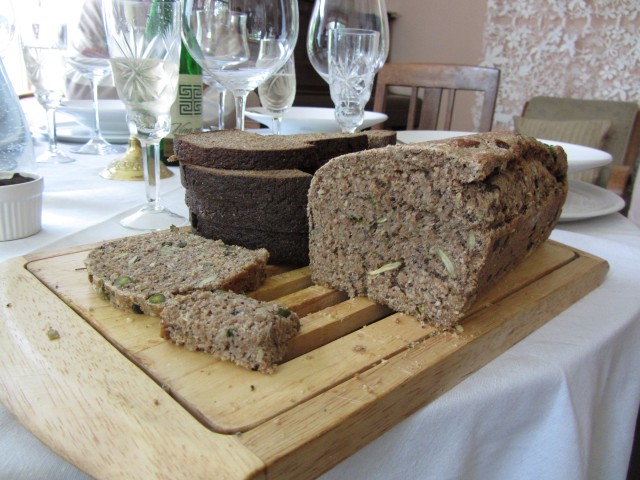 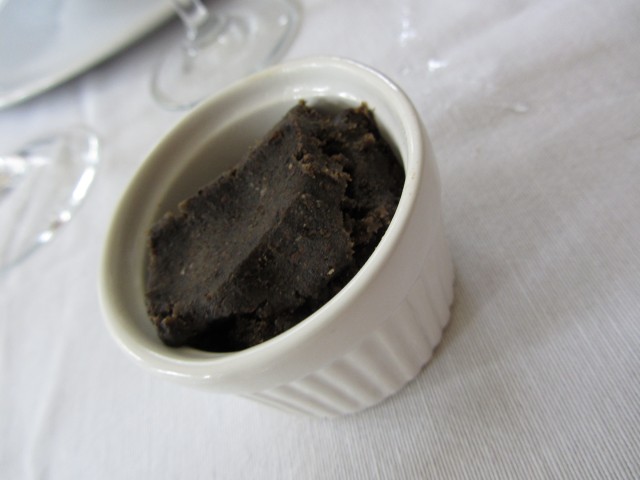 The next course was a selection of dried fish, including eel, which was delicious, and lamprey, which was kind of strong for me. I didn’t know the Latvian word for lamprey, so I asked, “Is this the one that sucks your face?”

They pointed out the second one from the front of this picture, and said, “That is the one that sucks on you.”

Signe said effusively in her Russian accent, “Take it! You don’t like it, I have big dog!” 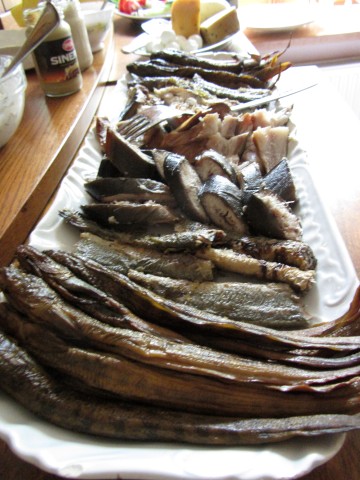 There was also an assortment of cheeses, including the same mild cheese with caraway seeds we had bought at the market. 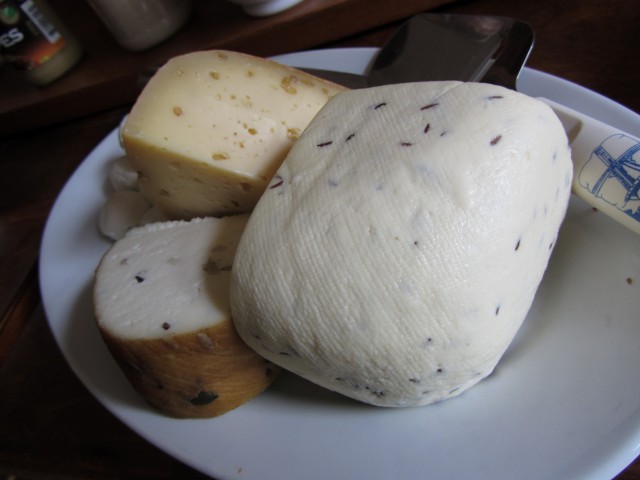 The main course was boar, which one of the guests’ husbands had shot. Boars in Latvia have to be certified. If they are not, you have to boil the meat for 2 hours to remove any parasites. The meat was very mild, being grass-fed as opposed to foraging. The side dish was a risotto made with hulled wheat and wild mushrooms, a perfect accompaniment to the boar as well as a vegetarian main course. Very smart. 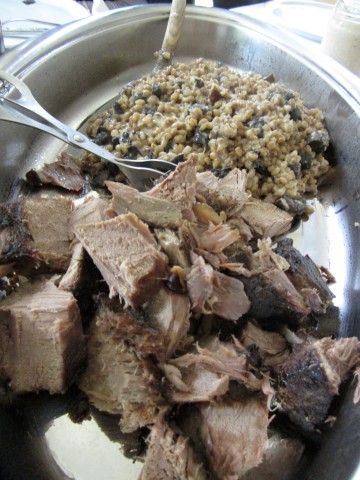 We had been seeing a rye bread dessert on menus, but it didn’t seem very appetizing. It took me about four bites to figure out this “cheesecake” was made from rye bread crumbs used like Graham crackers layered with a pastry cream. 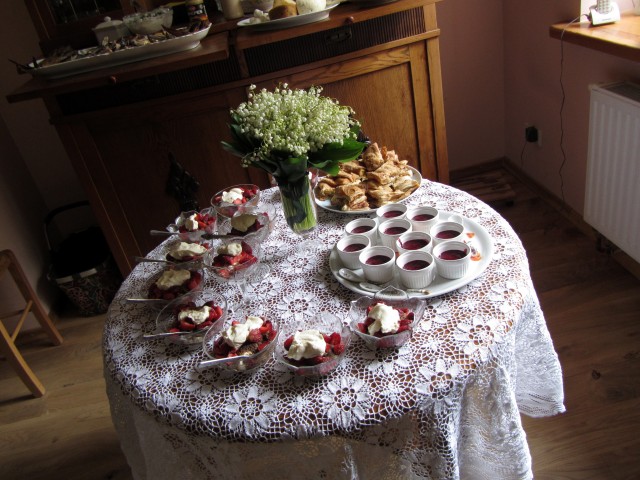 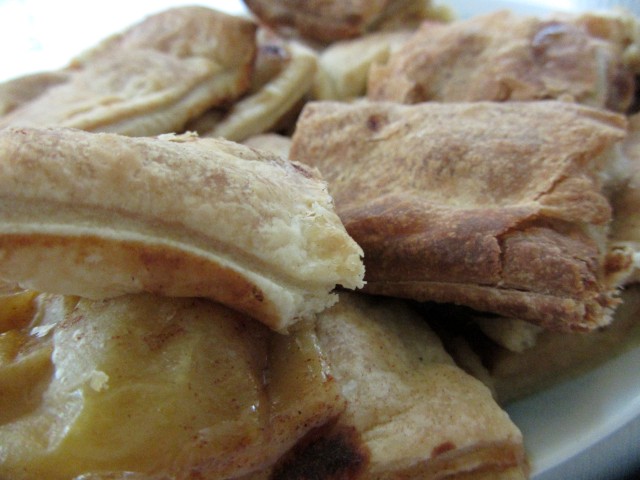