The Popcycle Rolls In 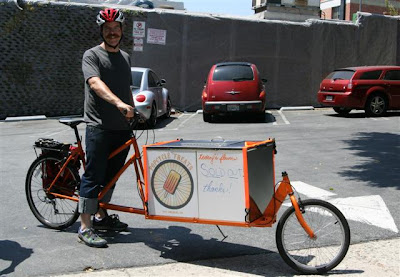 LA’s newest traveling food recently made its debut near the Silverlake Farmers Market. With flavor combos like Salty Cucumber Lime, Lemon Mint Blueberry and Cantaloupe with Anise, these are not your standard frozen fruit bars. And at $3 a pop they are an affordable splurge. The custom-made bike and freezer box created by owner John Cassidy are based on a Dutch design to ride on two wheels instead of the standard three-wheeled bike. There is no truck or a hitch, so sales are limited by leg work. They can only go as far as John can pedal. 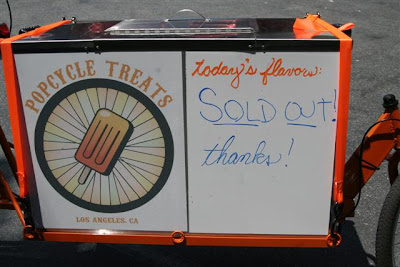 Paletas were one of the inspirations for the frozen treats. Michelle Sallah, a professional chef, was excited to discover the paleterias when she moved to LA and eventually married her love for playing with flavors and partner John Cassidy’s love for bikes to create Popcycle treats. Michelle comes from a diner family, and has worked at the Spotted Pig in New York and Bar Marmount in LA. She knows from experience that owning a restaurant is a 24-7 job. She and John wanted to work together, but in a project that would still allow them freedom. They worked and developed their idea throughout the last year. 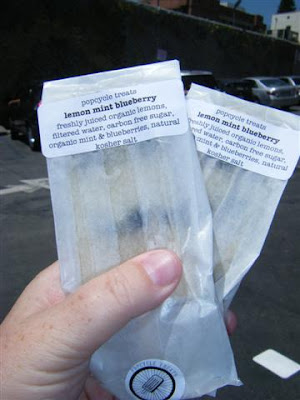 Michelle is playing with mixes of savory herbs and juices as well as other innovative recipes. For example, the “Arnold Palmer” is Raspberry Iced Tea and Lemon. The produce is purchased at the local farmer’s market and they use organic ingredients. Michelle is careful to use only as much sugar as the treat needs. The flavors are intense, but not so strong or unusual that children won’t enjoy them too. The bike only had 2 treats left when we arrived. They had saved them for me after I tweeted, begging them to wait while I zoomed over. So we only tested out the Lemon Mint Blueberry, which was an explosion of flavors, like a frozen lemon bomb. 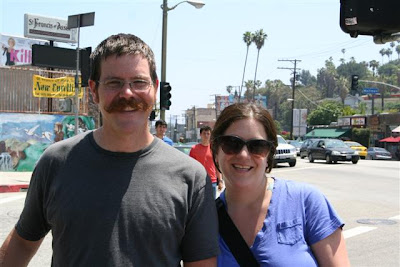 The bike can hold up to 200 frozen treats at a time, but will usually roll with around 100. Michelle wants it to be non-stressful for them, and a special experience for customers. There is a modern-day treasure hunt element to chasing food trucks and bikes, and she hopes there will be an exciting element to rotating flavors. Keep it small, keep it local, and you can maintain a personal vibe with customers as well as quality.

I like catfish. Sure, we all like catfish, but I think for me it is somehow deeper.
View all posts by Kiki Maraschino →
This entry was posted in ice cream, Silverlake, Trucks. Bookmark the permalink.