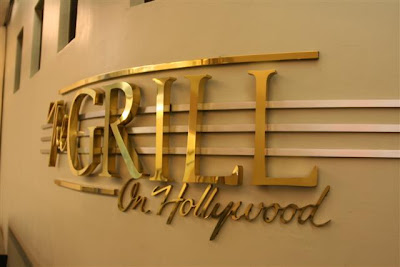 I have recovered repressed memories in therapy of gagging on powdery, mealy shoesoles of liver. There are rubber eraser bits that coat your mouth and won’t ever come off, ever, no matter how hard you try! Excuse me, I have to speed-dial my shrink.

We ate a lot of liver growing up, because it was inexpensive, it was one thing my parents could agree upon, and because of Eschbach’s Meat Market. Eschbachs was a fantastic old-fashioned German market in Gardena that allowed me to grow up with a wonderland of sausages. But Eschbach’s sold calves liver at 10 months old, which to my farmer mom was the perfect liver. 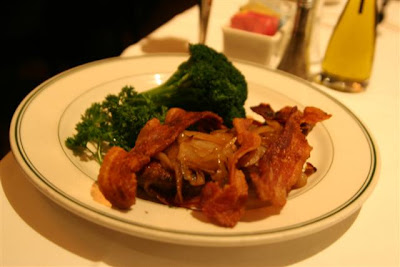 Luckily there were five of us kids, so we had a complex under-the-table trade going on. Roddie and Greg ate all the liver, Russell ate the broccoli and cauliflower, and Glen and I ate the remaining vegetables and fish.

When The Grill at Hollywood and Highland invited us to try their Liver Lover’s Extravaganza, I agreed under one condition — that my mother accompany me. Let’s just say we had a score to settle.

The Grill on the Alley opened in Beverly Hills in 1984 and has since expanded to four locations in California as well as in three other states. The Grill at Hollywood and Highland is the fourth “The Grill”, opened in 2001. In spite of being located in a giant outdoor mall in the heart of touristy Hollywood, the warm tones and rich leathers make an elegant white tablecloth steakhouse. I can’t help but imagine what a nice place this would be for a business dinner. 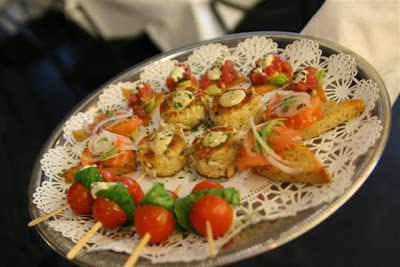 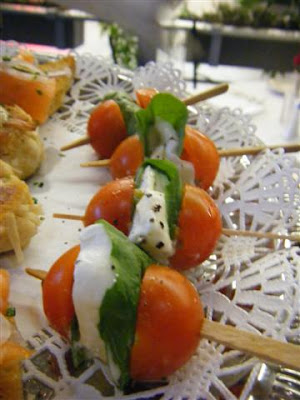 The evening started off innocuously enough with some lovely doots — crab cakes chock full of crabmeat, adorable little caprese skewers with tomatoes that exploded on the tongue, fresh ahi and avocado chips and thinly sliced salmon (OK, gravlaax). There was a mix-your-own martini bar with a choice of straight up vodka (“The CEO”), grapefruit, or blood orange martinis. Some bartenders would argue that the fruit drinks were actually cocktails, not “martinis”. Nonetheless, the blood orange martini-slash-cocktail was delicious, so cold, freshly swirled with ice. 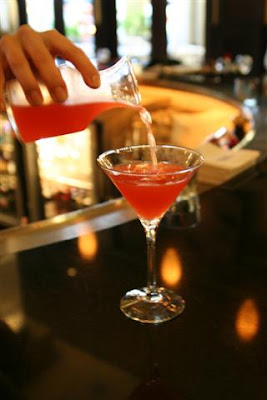 We were seated near some fun bloggers. Eddie asked me what the tape recorder was for.

“Because my mom says some really funny things and I want to catch them on tape.”

He addressed my mom, “What do you say that’s funny?”

She shrugged in an exaggerated way, ‘I don’t understand it! I don’t think I’m funny at all!”

The starter was a light salad of endive, radicchio and romaine with bleu cheese and pecans. The bleu cheese was mellow and delicious, unlike the overwhelming bleu cheeses that used to be ubiquitous. 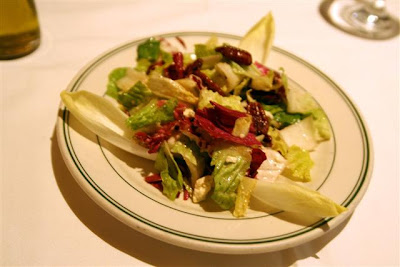 The calves liver was farmed in Pennsylvania and served at 6 to 7 months old (my mom shakes her head at me and holds up 10 fingers, disagreeing with the chef). According to the chef, “We have been serving liver at The Grill since, well, since we opened, and we actually do it quite well. Its actually one of our signature dishes. We sold anywhere between 20 and 25 livers a day, you get six to seven orders out of a liver.” He went on to expound on the protein, B vitamins and other benefits of eating liver. 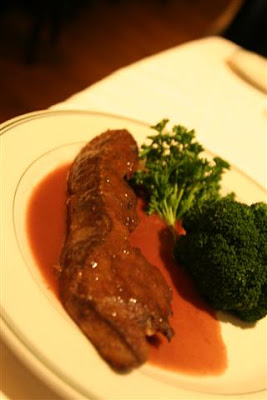 The liver was served either old-school style with bacon and onions, or with a Bordelaise sauce. When the plates arrived, we were all surprised by the hearty portions. It was more like pork loin, both in appearance and texture. The creamy, yet beefy meat had none of the powdery pencil eraser graininess or leatheriness of the liver we grew up with. If not for that unmistakable taste of organ, it might be hard to identify blindfolded.

Unfortunately, even covered in Bordelaise, it still tasted like liver, so I just “fake ate” it, cutting it up and pushing it around my plate. Accompaniments included a giant stalk of broccoli (is my mom actually snickering at me behind her napkin?). Other sides were brought out for us to test — mashed potatoes, creamed spinach, and my favorite, braised whole mushrooms. 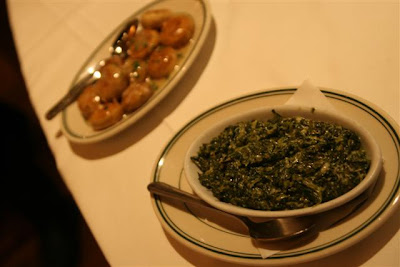 My mom however, stuck stubbornly and faithfully with the liver and bacon.

The desserts, which we all shared, were mind-blowing. The brownie pie coated in both chocolate and caramel sauce and studded with candied peanuts was tough competition alongside a traditional strawberry shortcake. 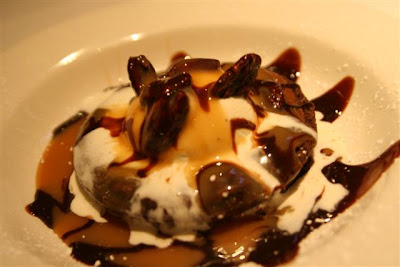 The shortcake was properly laquered with a sweet coating outside and a crumbly inside. The strawberries were intensely sweet. But they were no match for the Key Lime Pie, rich, creamy, and puckering with lime zest.

This is definitely a meal for grown-ups. If you are mature and can handle your meat, this is the special for you. Apparently I’m still an 8-year old. 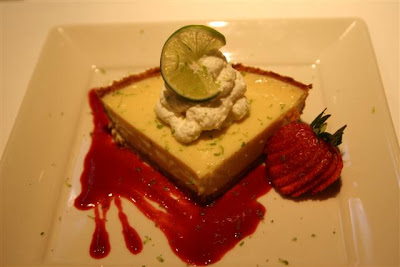 Random soundbites from the tape:

Eddie: Can’t you think of any other word to describe it than liver-y?

My Mom: (gesturing to Eddie): If he had come to Easter dinner, he would have eaten my cabbage rolls

Me: Mom, I ate the cabbage rolls

Mom: Well, I knew somebody didn’t eat something.

Blogger: I heard that you die if you eat a polar bear liver

Another blogger: You’d probably die if you tried to eat a polar bear liver.

Me: Because I have to have a hysterectomy, and you could have my uterus if you want it.

Eddie: I would treat your uterus with the utmost respect.

Me: I eat so much fat, it’s probably like foie gras. And I’m diabetic, so I bet it’s sweet too.

Me, calling over a plate-laden server, “Come here, you photo, op, you!” 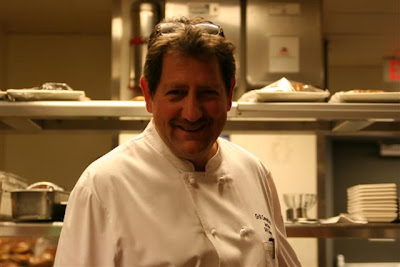 I like catfish. Sure, we all like catfish, but I think for me it is somehow deeper.
View all posts by Kiki Maraschino →
This entry was posted in Events, humor. Bookmark the permalink.