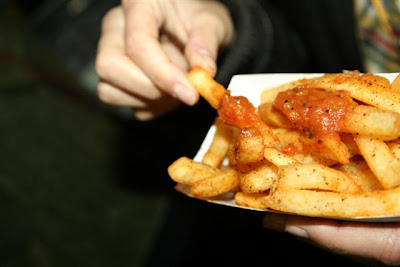 Much of the buzz at Track 16 art gallery one night was surrounding the Dosa Truck parked outside. Thanks to their menu of samosas, masala fries, and their main attraction, filled dosa “wraps” at reasonable prices, there was a constant buzz around the truck. 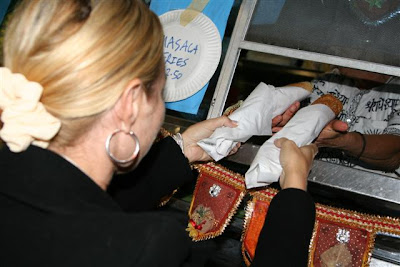 Leena Deneroff always dreamed of turning her love for central Indian food into a career someday. She imagined a little cafe somewhere. The recent popularity of food trucks has given her the opportunity to realize her dream. A relative newcomer at only a few months, Leena was happy to discuss the process of getting the dosa truck on the road. 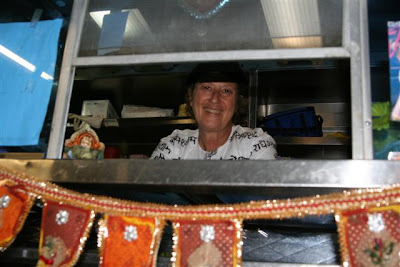 The logistics of making dosas to go was a little more complicated than expected. According to Leena, with a traditional taco truck you can fry the meat and heat the tortillas, doing all of the cooking in the truck. But Indian food requires a lot of prep work. Everything is made from scratch. Just perfecting the dosa batter recipe and figuring out fillings that would not ooze out of the delicate fermented bread was a laborious task, but a labor of love.

She resolved the matter of messy dosa fillings by coming up with an Indian pesto based on methi (fenugreek leaves) white sesame oil, garlic and chili. Her masterpiece is “The Slumdog” which includes the pesto, fresh spinach, potatoes and paneer.

I asked, “Did you consider a heartier bread, like naan?”

“But it’s called the Dosa Truck”

“Well, then it would be called the Naan Truck.” 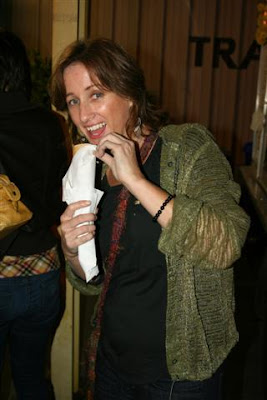 Other items on the menu are samosas, mango lassis, and dosas with stuffings like spinach, mushrooms and cheese, sweet potato masala and “Mumbai Madness” a masala dosa with potatoes. If you are lucky, they will be serving their special masala fries. They wisely use a generous spice mix instead of drowning the fries in sauce, keeping them nice and crispy. The menu is strictly vegetarian, and items can be made vegan upon request. Most of the menu is priced at 6 and 7 dollars, except for the fries, which are a well-deserved 2.50. 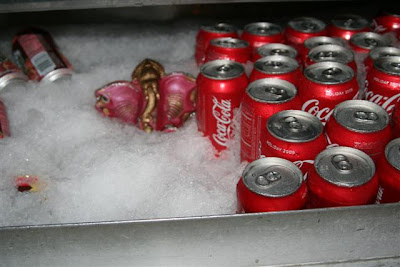 Ganeesh, you will catch your death of cold in there!!

Since they serve samosas, I asked whether they might be considering serving my favorite dish, samosa channa, where the samosa is covered with insanely spicy chickpea channa and a variety of condiments. Leena said that since they now have figured out how to make huge amounts of potatoes of the grill, they may be branching out to channa. 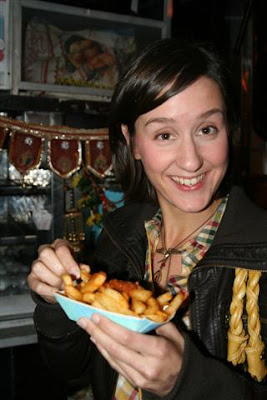 Leena tries to avoid the typical truck spots, like Wilshire, and focuses on art openings and (surprise) yoga studios. Leena says her next stop will be at the Highland Park Art Walk this Saturday. Follow them on Twitter to get the latest location. Try some masala fries yourself and you’ll be hooked. As their business card says, “ommm good”. 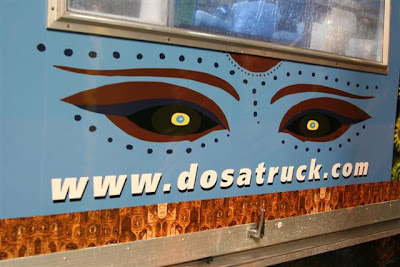 I like catfish. Sure, we all like catfish, but I think for me it is somehow deeper.
View all posts by Kiki Maraschino →
This entry was posted in indian food, Trucks, vegetarian food. Bookmark the permalink.