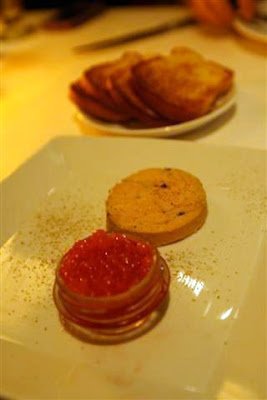 If there is one thing I love, it is foie gras. So naturally, I LOVE La Cachette. The original La Cachette on Little Santa Monica was a little ritzy for a relatively new foodie. I remember standing outside in the rain on the cell phone asking my brother how much to tip a Maitre D’. I always expected to turn around and see Nancy Reagan at the next table.

So La Cachette Bistro down by the beach is a welcome relief. A much more mellow vibe, scaled way down on zee frainch waiterrr ‘tude. BUT it still has the luscious, luscious foie gras, and, as we were to find out, some very hearty and comforting winter dishes. We were invited to test out the dineLA menu during the last go-round. 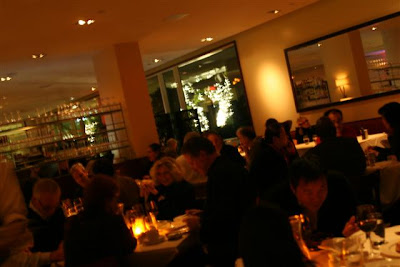 Fawning all over chefs does have its benefits, one of which is that Chef Jean Francois sent out a terrine de foie gras with rhubarb pearls. Holy Christ! It was silky and fatty and rich and melted on the tongue. We ended up doing that thing where you cut the last bit in half, then the other person cuts it in half, and you keep doing that until you have a ridiculously small dot on the plate, but no one wants to be rude and take the last bite although they can’t stop eating it. let’s stand on the chair and yell BRAVO! for that, and thank you, Jean Francois, that was very generous.

I started with the fish and longostine soup, and Lindsay chose the tartar. I have to quote her here, it is so poetic, “The champion of the appetizers was the tartar, which beckoned with an almost winking come-hither sheen.” Once we got a bite of the grassy, herbal, citrusy and smooth fresh tartar. It was like meatloaf’s cousin that left the farm and became a big success in the city. 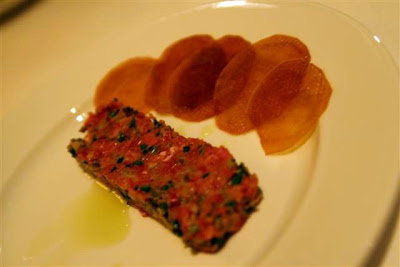 For the main course, I chose the Beef Daube, a stew braised in red wine stock. It was hidden under a blanket of pasta rounds, like half-raviolis. A little odd, but original. The stew that peeked out from beneath made you stop and stare at your dining partner in disbelief. All conversation stopped at first bite. The stock was so intense and reduced down to pure beef essence. The meat was tender and flaking apart, making my mouth water at the very memory. 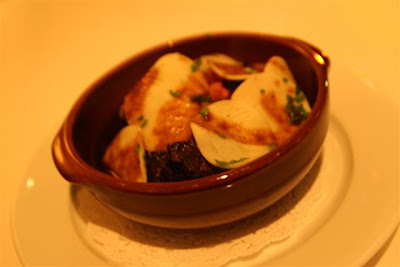 Lindsay’s Housemade Boudin Blanc Sausages were not what we expected. They were so light and finely ground, like won ton filling or gefilte fish. They yielded to the tooth willingly and easily. The little tater tot-like potatoes that accompanied the dish were a capricious delight. 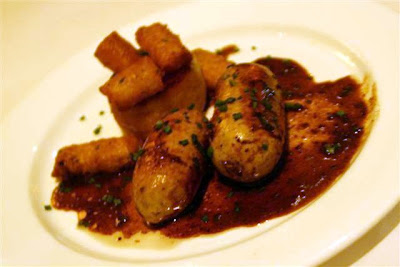 The chocolate cakes, cut into fingers, reminded me of an upscale Devil Dog or Zinger. The chocolate was on the finest quality and treated with great care. Somehow the inside of the cake managed to stay hot while I snapped away with my camera. 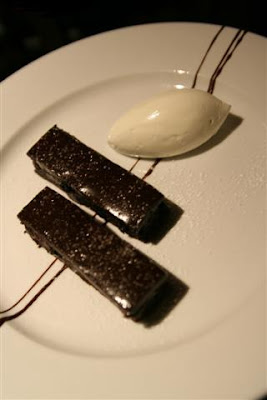 Lindsay’s apple tart, which she describes as ” stacked with thin slices of apple on a bewitching, buttery, flaky pastry crust, topped with caramel sauce with creme fraiche on the side.” 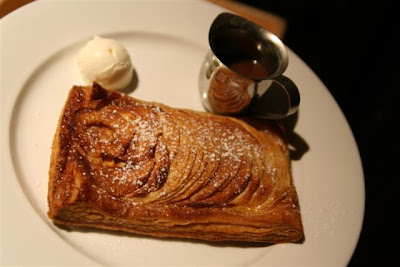 I love La cachette, I love Jean Francois, and I will definitely return to the little bistro by the beach for every special occasion.

I like catfish. Sure, we all like catfish, but I think for me it is somehow deeper.
View all posts by Kiki Maraschino →
This entry was posted in French. Bookmark the permalink.