Posted on February 4, 2010 by Kiki Maraschino 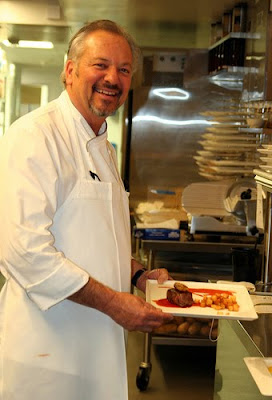 During DineLA week(S) DineLA Fortnight? we sampled a number of restaurants, some undercover and some at the invitation of the restaurant. Sometimes being fawned over is an embarassing pain in the ass, and sometimes it is very pleasing, although a lady tries not to gloat. Being a guest of honor at Rivera is right up there in the Queen for a Day category. 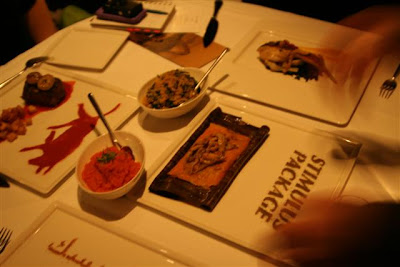 When I found out we were dining with the PR person, I was a little concerned it was going to be like a Time Share seminar. But Rivera’s PR is an excellent and fun dining companion. She is a good listener and teased stories out of our childhood that we hadn’t thought of in years — discovering the coincidence of a shared memory of picking wild raspberries along the dirt alleys of Vancouver. 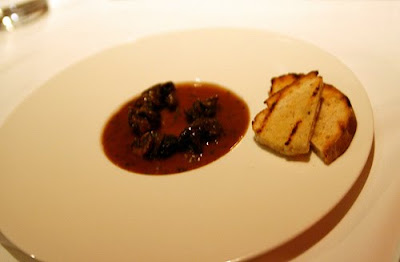 You think the reason people like escargot is because it is soaked in butter and garlic. You can soak horseshit in butter and garlic and people will eat it. Rivera’s snails, which are a result of his childhood housekeeper cooking live snails in wine and garlic and an idea culled from a stint at L’Ermitage don’t mask the flavor of the snail but accentuate the earthy, nutty taste of the garden. I waited for that moment when the Spanish wine and Iberico ham sauce dissipated and the true icky nature of the snail would reveal itself, but instead I found my mouth seeking out more flavor, wanting it and savoring it. It made me consider collecting snails after the next rain and cooking them skewered over an open fire to try their pure charred essence. 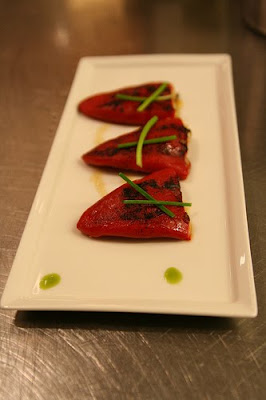 The Piquillos Rellenos (Stuffed Spanish Peppers, Chorizo, Golden Raisins, Gruyere), combines the sweet and savory to perfection. The chile is not so hot as to be a challenge, and I seriously think I could eat these all night long.

Then there was just so much food coming at me I became overwhelmed, beets, and a salad, and striped bass that came with a horrible story told with a little mischevious gusto by the chef. The standouts at this point were a side dish of delectable and sweet carrot puree with pumpkin pie spices, and an entree of insanely plump scallops with middle eastern flavors like preserved lemon and eggplant. There is a stringy tendon that runs through sea scallops, and at some point in the meal you are expecting to hit that chewy bit. The scallops were so well cleaned they were meaty and silky right through from beginning to end. It may seem like an obscure detail, but these details are what separate the good from the truly great. 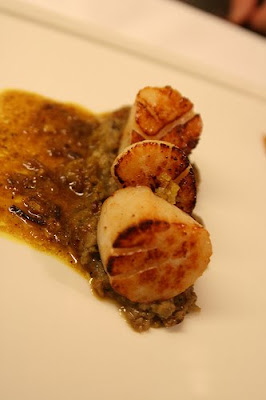 Then I was invited into the kitchen to take pictures and ran completely rampant, climbing up on a ladder and praying that I didn’t lose an earring in the panna cottas as they waited for the oven. I didn’t care about the tender steak, or the flavorful duck, or even the cake. All I wanted to do was get my shot. I was in a photographing frenzy. 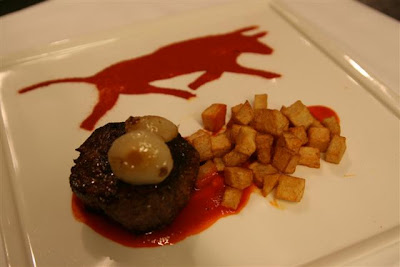 Finally I was led back to the table and the only thing to settle me down was the cheese plate and the Estudio en Flan. Was that caramel? Dulce de leche? Sooo goood. We ended the night with John Sedlar Rivera’s private bottle of tequila on our table, feeling like the VIPPiest VIPs ever. 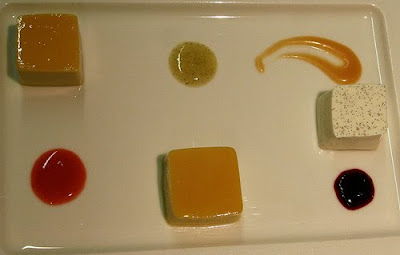 But the true gift of the night wasn’t the private reserve tequila, or the storytelling, or the free reign in the kitchen. It was opening my eyes to the fact that many of the animals and squishy parts I have eaten only out of curiosity before can be celebrated and do not need to be coated in butter and garlic for me to enjoy them. There is a whole new world of little creatures for me to enjoy! They better start running. 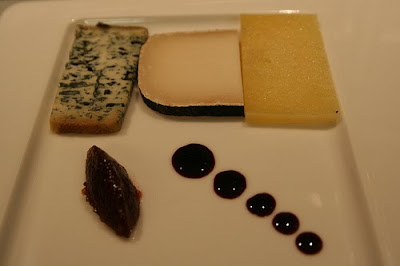 I like catfish. Sure, we all like catfish, but I think for me it is somehow deeper.
View all posts by Kiki Maraschino →
This entry was posted in dineLA. Bookmark the permalink.