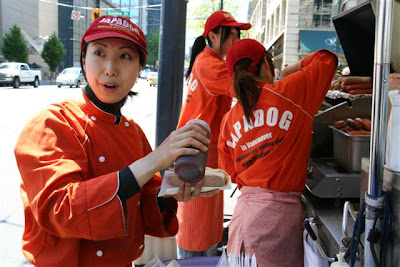 Friday Justin and I were super-excited because we were going to JAPADOG! The greatest hot dog cart in the world! There are three locations – one on Pender and Burrard (menu), the one we hit in front of The Sutton Place Hotel, and Japadogs has just opened a third location Coal Habour Community Centre. 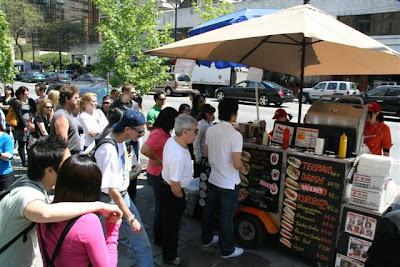 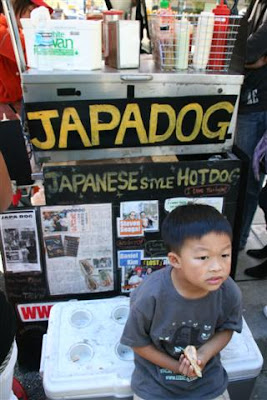 The line stretched for an entire block, and the wait was long, but the crowd was patient and convivial. They knew there was something wonderful waiting at the end of that line. 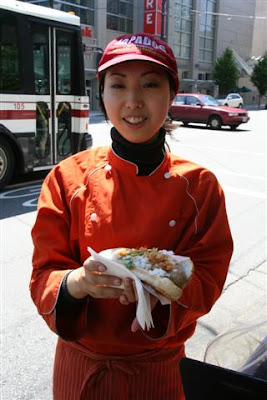 There is a regular menu, then each stand has a special menu. The standard menu includes turkey and veggie “smokies”, bratwurst, and all beef dogs. Since my visit, they have started offering kurobuta (black hog) dogs. Specialty menus at different stands vary. There are four special options at this stand: Terimayo, Oroshi, Misomayo and Okonomi.

The Terimayo is an all-beef dog with teriyaki sauce, Japanese mayo, fried onions and nori (seaweed). This is their best-seller. The teriyaki flavor was overpowering. We expected the nori to be the overwhelming flavor, but the teriyaki made it almost impossible to taste. 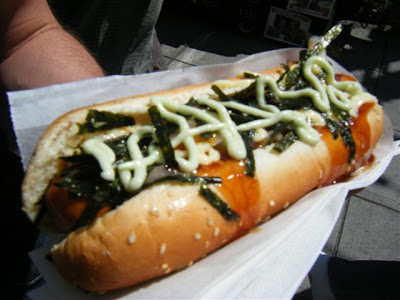 The Oroshi (Daikon) is made with a special soy sauce, grated radish and green onion on a bratwurst. I chose to add wasabi mayonnaise to mine. The sausage was of the highest quality, delicious with a lovely meaty texture. The wasabi mayonnaise was so spectacular I became obsessed with wasabi for days. 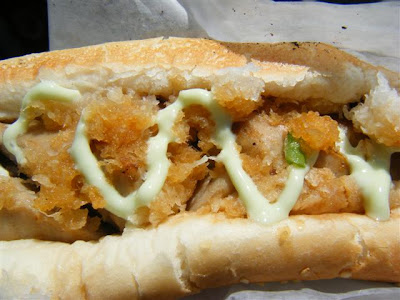 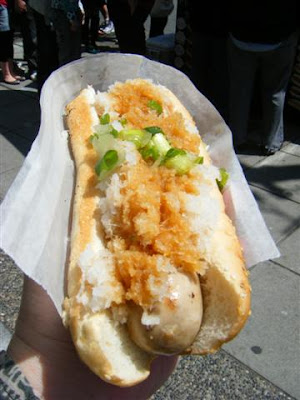 The other choices we did not try were still exciting – the Misomayo is oddly enough made with Miso and Japanese Mayo. It was my first choice, but it was sold out. The other is Okonomi (based on a popular Japanese pancake and translates to “what you want”): Special sauce, Japanese Mayo, Fried cabbage, dried bonito flakes. (a review of Japanese Kewpie mayonnaise)

I allowed Google toolbar to translate the Japanese-language story of Japadogs. Computers will never replace human translators because they don’t understand context, so they can’t make proper word choices. This one doesn’t seem to do grammar either.

From what I gather, the Japanese founder dreamed of overseas crepe stands and opened crepe stands in New York. While vacationing in Vancouver, he and his wife decided to open the creperies there – and name them Japadog. Sooo, so much for computer translation. Here is the rest of the story straight from the site via Google translation:

In Vancouver, you can meet a lot of people, luck, 2005 May OPEN. OPEN Initially, I was not decided upon the name of the store. For some time, had become increasingly called JAPA DOG.

Initially, Japanese style, but I did not have much popular gradually in the course of one year one year and continued, it began to be popular items.
Of course, the contracting out of everyone of us (including sales only one a month), but also a visionary and it did not work the menu. Every day, we are prototyping in various ways.

During lunch and evening, you may be side by side. Away to keep you waiting, I’m sorry all the time. That I strive to provide as soon as possible, the limitations of the truly “Darn, and I hasten” in my mind is always crying.

But we don’t mind being side by side, because Japadogs is a thing of wonder. I wish I could tell this visionary how much we love them and maybe it will stop his mind from crying. 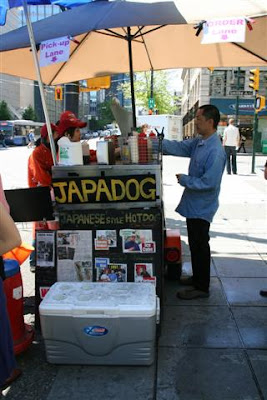 I like catfish. Sure, we all like catfish, but I think for me it is somehow deeper.
View all posts by Kiki Maraschino →
This entry was posted in hot dogs, Vancouver. Bookmark the permalink.